Again, August was the only time I could get away from work and as it's not a great cycling time in France, (too hot, too many tourists and so-on) I booked another commercial 'self-guided' tour which means all I had to do is ride; accommodation and evening meals were pre-arranged and more importantly, my gear was taken from hotel to hotel for me

Here's a map provided by the tour company: 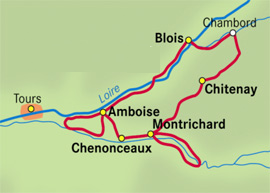 Getting ready to go:

Maps:   I used the AA FR8 Central Loire Vally 1:180,000 map together with my Nokia 6110 Navigator mobile (cell) phone – even better than a paper map but using GPS chewed thru the battery pretty fast.   The tour operator provided good maps with the daily route clearly marked out and with excellent written directions

Visa:   I didn't need a visa, some folks do tho and the French Ministry for Foriegn Affairs has a nice website where you can find out whether or not you need a visa

B/trike: I flew SAS – not bad – and they were very accomodating with the weight of the trike in its nice hard case

I again used a hard case from BikePro because to get from Paris airport to the Loire I was using the train and bikes on trains are just marginally less hassle than bikes on planes. I couldn't take the trike on the TGV and the Sernam rail freight forwarders won't take trikes either so I had to make the trike look like just another piece of luggage. It worked

I spent a few days just being a tourist in Blois - it was as fabulous as you would expect - to acclimatise to the time-zone, the food, the water and to life in general...   and I had absolutely no difficulty with uppity locals even tho my French language skills are best described as merde

Accommodation:   My hotels had all been pre-arranged by the tour operator and they were all very good, all the hoteliers were really helpful and secure bike parking was offered even in the smallest of places

Food:   Usually when I tour I come home a little lighter than when I leave, but this time I gained a bit of weight!   Fond memories: lots of rabbit, duck and fish on offer and tho Loire wines don't always rate highly with connoisseurs this area is home to Sancerre and Vouvray for example, so finding a good wine to wash down the good food is very easy and not expensive

Plenty of small shops and markets along the way, and for those times when you just want to watch the world go by, plenty of cafes for coffee and a snack (or a nice cold beer)

Money:   Being a tourist destination, credit cards rule. Everything, well, almost everything, is available by credit card and for those things that aren't, there are heaps of ATMs

Roads:   French roads were mostly well paved and often there were nice clearly marked bike lanes and where there weren't bike lanes there were nice verges. Of course out in the backblocks the roads are more like those in Oz - a collection of patches and pot-holes

In towns the traffic was often heavy, but then again, there were bike lanes almost everywhere and where they didn't exist, traffic was always manageable. Compared to Sydney drivers, French drivers were a dream come true; patient, courteous and inevitably friendly

Outside the towns where there were no bike lanes drivers seemed accustomed to sharing the road and would simply wait until an appropriate space opened up before overtaking. At intersections and on round abouts more than one driver ceded right of way with a smile and a wave even tho they had precedence

The bits that weren't so good?   The climbs!   Some of the ascents were murderous, and the professionals make it look so easy.   Then again, maybe if I took drugs like some of them...

The most frequently asked questions:

There's not really one most frequently asked question, it seems everyone loves France as a tourist destination and everyone seems to be looking for recommendations

By folk inside France:   I saw you yesterday didn't I?

There were just so so many cyclists on all sorts of tours!   Naturally we all kept crossing each others paths. Of course as always the trike was an instant ice-breaker and I had a lot of lovely chats with a diverse range of people about its virtues as a tourer